This a series delving into the passion and flair that makes the Copa América a worthy tournament of the sport we love. We hope through the succession of these articles you find joy in the tillage of the tournament and discover what makes soccer, fútbol.

Please consider reading the series in order, it’ll make the journey flow better. But don’t worry, each individual piece will make sense on its own too. It’s your choice. This is No. 6.

If you haven’t read the first article of the series, you can do so here.

Bobby Wood, Jermaine Jones, and Alejandro Bedoya are all out for the USMNT at the semi-final stage against Lionel Messi’s Argentina

How will Jürgen adapt tactically and how in the world will he replace three starting players on the USMNT team? Especially considering Argentina’s stacked squad didn’t even have room to call Carlos Tevez and Dybala. Talk about depth.

Well first, let’s make sure we have enough players to field a starting eleven that won’t be overrun by Argentina.

Wood was being used on the left wing for his pace and decision-making in the final third.

He was only being used for his pace. How often did we see Wood receiving the ball on the wing and misplacing or playing in the wrong teammate? Wood excels when the final ball is given to him, but when it’s him that needs to make a pass to give someone a final ball, it’s incredibly lacking.

Replacing Wood on the wing may change the dimension of the USMNT. Yes, their pace on that wing may decrease, but it’s okay because we keep the speedy Zardes (he’s been growing in performances game after game) on the opposite side.

I vote for Christian Pulisic. Not only does the young man have the pace, but BvB plays a quick countering football based on effective ball retention.

That sounds helpful for the USMNT, no?

The center of the park is where things start to get tricky. Bradley stays (unfortunately), and we’re forced to replace our “ball winner” Jones and one of our more technical players in Bedoya.

Zusi or Beckerman needs to replace Jones. Both players tend to sit in front of the back four, shielding and protecting. Although anything shy of Captain America’s shield made out of Vibranium may be needed to keep Messi & Co. away from Guzan’s eight by eight rectangle. 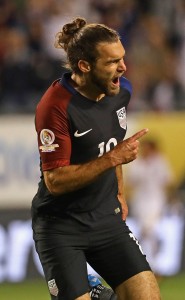 CHICAGO, IL – JUNE 07: Graham Zusi #19 of the United States celebrates scoring a goal against Costa Rica during a match in the 2016 Copa America Centenario at Soldier Field on June 7, 2016 in Chicago, Illinois. The United States defeated Costa Rica 4-0. (Photo by Jonathan Daniel/Getty Images)

Zusi takes the cake for me here. Both would be sound replacements for Jones, but speed is the primary concern when playing against Di Maria and Messi running at you full steam ahead. Beckerman is tactically aware, but his legs won’t carry him to where he needs to be in time.

The USMNT would be exposed.

The final and most important piece of the puzzle is the third midfield player, Bedoya’s replacement. This absolutely, 100%, has to be Darlington Nagbe.

Not starting the No. 10 for the USMNT would be an atrocity.

You can read about Nagbe’s exploits with the Portland Timbers here.

The team is wounded with starters out and someone needs to step up. Nagbe fits the bill. He has yet to replicate his club form for the USMNT, but his opportunities in Copa America have been appalling.

Nagbe is the closest thing the USMNT has to a complete box-to-box midfielder. You may not have seen it yet if you didn’t see the Portland Timbers incredible run to the MLS final last season, but trust me, he’s almost there.

He can win the ball, distribute it, or take it himself into the opposing half. He’s excellent at tracking back and helping out the back four, but can just as easily find open spaces on the pitch.

Nagbe turns the tide of a match by not only extinguishing the opposition’s attack but also sparking his own team’s counter.

Nagbe has to be prepared to offer the USMNT something they don’t have and that something is his ability to fill multiple roles within the US midfield. By him taking on a larger responsibility in the middle of the park, Zusi can focus on patrolling the lines in front of the back four and Bradley can just run around with his captain’s armband.

“I Believe That We Will Win!!”