This a series delving into the passion and flair that makes the Copa América a worthy tournament of the sport we love. We hope through the succession of these articles you find joy in the tillage of the tournament and discover what makes soccer, fútbol.

Please consider reading the series in order, it’ll make the journey flow better. But don’t worry, each individual piece will make sense on its own too. It’s your choice. This is No. 7.

If you haven’t read the first article of the series, you can do so here.

It’s a shame you know? It really is.

Forget about all the circumstances. Just think. One more victory and we’re in the finals of the Copa América as the host nation. Specifically, the first nation to ever host the tournament outside of South America.

Maybe at home, with the Outlaws at full voice, then maybe we could resurrect the alma of the 1994 USMNT World Cup squad?

I know. Getting through Argentina would be difficult enough. Impossible even.

But with the right field players, we could frustrate, win the 50/50 ball, and be physical, disruptive, and volatile? Maybe we could start to shape some identity as a brand of soccer.

The USMNT can be a relentless mold of Atlético Madrid. Embrace the philosophy of constant pressure off the ball.

Combine that with the volatile and incredibly direct attack of BvB.

The athleticism is there. Just look at Yedlin’s pace on Fifa 16. 93 for pace, acceleration, and sprint speed. Fifa ratings are debatable, but it helps put things into perspective.

Haste is everywhere on the squad with Wood, Johnson, Nagbe, Pulisic, and Zardes all impressing.

Nagbe has been causing a riot up in the Pacific Northwest. Nagbe’s expanding box-to-box midfield abilities percolate through the pitch at Providence Park. He can link the defense and offensive halves of a team seamlessly.

If Bobby Wood’s last minute heroics had ever earned him a regular run in the USMNT starting XI, he might have developed a more decisive mind when participating in the attacking third of the pitch. He could have been a lighting quick ‘give and go’ kind of guy. He’s already shown his ability to score when he’s given half a chance.

We played so many friendly matches leading up to the tournament, but we still managed not to have our back four figured out.

For the last few years, we could have even resorted to having Yedlin, Besler, Orozco, Chandler, Johnson and Gonzalez play in random positions across the back four until something worked out. It would have figured itself out sooner than the methods we’ve been trying for the last few years.

Gonzalez wasn’t on the roster, which just further perpetuates confusion. Players take time to develop to the next level. Gonzalez had the opportunity to do so after coming off an ideal start to his move to Liga MX by winning a Clausura title.

That kind of development is invaluable.

Guzan did admirable in the tournament. He never seems to have the right men in front of him for country, or club.

No way any keeper on the planet was saving Messi’s 55th international goal to put Argentina up 2-0 on a free kick, but his hesitation on the first goal put him in no man’s land. He can still have moments of indecisiveness after all these years.

Tim Howard may not have had the best season at Everton, but neither did Guzan. Aston Villa must have had the most goals against in the Premier League.

Howard has other favorable factors besides unreal technical goalkeeping abilities. Howard is a leader. Every time the camera zooms in on him, he’s howling at one of his defenders, not asking, but telling players where to defend and what areas of space to cover.

That type of leadership was missing the entire tournament for the USMNT. It’s unfair to ask a player such as Bradley to fill those shoes. The mentality isn’t there.

Yes, the USMNT made it to the semi-finals and that fact would not have been believable a few weeks ago. They have the chance to earn bronze at the tournament. That’s something to be proud of. Argentina is unworldly. 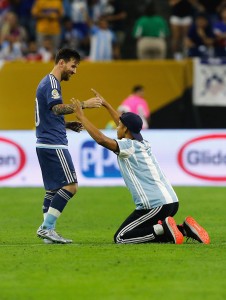 HOUSTON, TX – JUNE 21: Lionel Messi #10 of Argentina interacts with a fan who ran onto the field prior to the start of the second half during a 2016 Copa America Centenario Semifinal match between Argentina and the United States at NRG Stadium on June 21, 2016 in Houston, Texas. (Photo by Bob Levey/Getty Images)

FIFA does rank Argentina as #1 in the world after all.

The glaring mistake vs. Argentina was the tactics. The USMNT wasn’t even given the opportunity to have a fighting chance.

Throughout the process, I was hoping Jurgen would give an opportunity for Nagbe and Pulisic to come into the side.

Imagine an attacking half of Nagbe and Jones. Jones, a complete enforcer, and Nagbe, doubling the effort but providing an outlet as well.

Drop Dempsey and play him as CAM or enganche type role. He has the speed still in the first three steps (the most important), and he can dictate the game from a back seat role. His creativity gets wasted when he’s the most forward player on the pitch.

Pulisic would be questioning defenders on the left side and Zardes running by them on the right.

Pulisic was the only player last night that took the game to Argentina while everyone else paid far too much respect to the opposition.

Was it difficult to fathom that our midfield would be overrun using Beckerman? The audacity not to slot in Nagbe from the opening whistle is alarming. Even with Jones ruled out for the game, there’s still a belief in the coaching camp that players on the bench for the USMNT are better than Nagbe?

That kind of mentality is just hindering the progression of the USMNT. The US didn’t play well in any of their games before this. Yes, they topped the group of death and made it to the semi-finals, but did you ever watch one of their matches and think, “we look dominant out there.”

Their identity is non-existent. After all these years Jurgen has been unable to implement any sort of playing style that embodies the Americans.

Heck, he can’t even make his players give him 100% on the pitch.

For all the deficiencies in Arena and Bradley tenure, at least they provided a team with some fight.